By bkirby April 4, 2016 Uncategorized
No Comments 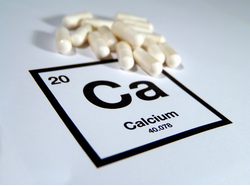 I’ve seen many dogs and cats with abnormally high levels of calcium. Keep reading, I’m not trying to be Dr. Smartypants. Trust me. It’s not good to have a pet with high calcium levels. Currently, Dr. Dinwoodie and I are managing two dogs with dangerously high levels; both for different reasons.

When I was senior veterinary student I was assigned a case referred to the Michigan State Veterinary Clinic suffering from lymph node cancer, lymphosarcoma (it’s a bit like Hodgkin’s Disease in people). In addition, this dog had very high levels of calcium and that’s the reason she was so sick. It had only been recently determined that lymphosarcoma could result in elevated calcium levels. It was called Pseudohyperparathyroidism (OK….that’s a Smartypants term).

My managing resident thought this was a good case for me to present at grand rounds, so he assigned me the task of not only presenting the details of this patient, but also reviewing the normal physiology of calcium metabolism; the mechanisms of absorption, storage and mobilization of calcium in the dog and what causes it to get out of whack. It was a daunting task in the era before Google, the internet and no power point. It took days. I prepared my slides and notes and delivered a 30 minute presentation and answered questions before a group of 50 senior faculty members and students. I got an “A”.

Soon after graduation, at my first job in Norwalk, I encountered another dog with lymph node enlargement and high calcium. I thought, “I got this.” However, biopsies did not show the lymph nodes to be lymphosarcoma, but a different type of tumor, adenocarcinoma. How could this be?

The pathologist who read the biopsy referred me to a pathology resident who was studying this phenomenon, Dr. Don Meuten. He suggested I examine this dog’s anal sac area and lo and behold, there was a pea sized mass that turned out to be the cause of the hypercalcemia. This was a new thing. It had never been described in the American Veterinary literature. Dr. Meuten was preparing a paper describing this new disease process for a major publication and asked if he could include my patient in his report. The owner, while saddened by the diagnosis, agreed to allow Dr. Meuten access to her dog’s records. Sadly, after 9 months we finally put her pet down, but this dog was included in the first detailed article about this disease in the United States.

Dr. Meuten, who now teaches at the North Carolina State College of Veterinary Medicine, helped me write a practitioner’s case report for publication. It is my only contribution to the veterinary knowledge base. I am forever grateful.

Calcium is in my blood.